The Earth Dragon Canon methods are something I created through years of practice, meditation, and consultation. For a video of this practice method, and early access to new Science Fiction, purchase a membership to DapperGenius.com!

Click over to the Membership Section and get your membership today! 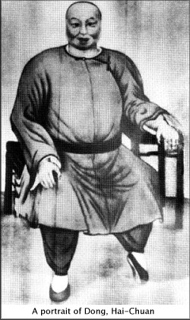 Around 1864, Dong arrived in Beijing and gained employment at the Su Wang Palace. After an impressive demonstration of his agility, the noble asked him to train household servants in his martial art. Later, Prince Su sent him and his disciple—Yin Fu—to collect taxes in Mongolia. When he returned, he left the Prince’s household, and taught the circle walking art publicly.

During this later period, Dong Haichuan renamed his art to baguazhang, and the legend of Dong and his creation begins.

In the legendary story, Dong Haichuan was either a criminal or rejected by his father because of a misunderstanding. Forced out of his hometown because of this disgrace, he was wandering the mountains of Hebei province when he came across a Daoist and Buddhist monk practicing circle walking. In some versions, the monks are so skilled in their practice that they can walk on water. Because of his love of martial arts, Dong Haichuan wishes to learn the skill of these monks. He gains discipleship with them and trains with them for many years. He leaves the mountains and arrives in Beijing, where he gains employment at the Su Wang Palace.

One night, Dong Haichuan was serving drinks at a palace party. The palace was crowded with people, and he couldn’t get through the throng to get more drinks. Dong used the lightness skill he had learned from the old monks and walked along the walls to get around the crowd. Impressed with Dong Haichuan’s skill, the noble asked what martial art he practiced. Dong did not have a name for his art, so he said that it was Baguazhang (Eight Trigram Turning Palm).

In either case, tales of Dong Haichuan’s skill quickly spread and, because of his position at the Su Wang Palace, many experienced martial artists sought him out for instruction. Famous disciples of Dong included Yin Fu, a master of Luohanquan, and Cheng Tinghua, a master of Shuaijiao. Instead of asking these masters to forget their earlier arts, Dong encouraged them to integrate their previous practice with the circle walking skill.

Because baguazhang is founded on the Yi Jing’s core principle of change, there is endless variety to its practice. Some schools create routines, others teach only a few postures and encourage spontaneity. All schools, however, teach the basic principle of walking on the circle as the best method for physical health, martial practice, and meditation. 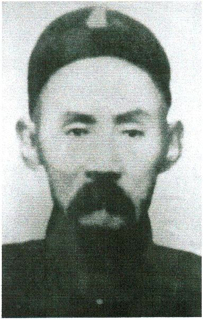 Yin Fu (1840-1909) was Dong Haichuan’s earliest disciple at Su Wang Palace. Some stories say that when he started studying with Dong, he did not appreciate circle walking and focused on striking and kicking methods, even laughing at the circle walking practice. Dong Haichuan was upset at this and said, “If you laugh at circle walking again, you won’t have your front teeth anymore.” Yin Fu began to laugh, and Dong used a palm strike to knock out two of Yin Fu’s front teeth. After that incident Yin Fu concentrated his practice on the turning palms.

Yin Fu was thin and small, but his strikes were strong, and his circle walking practice made him very fast and agile in a fight. After the incident with Dong Haichuan, he studied hard and developed new aspects of the baguazhang art.

After training with Dong Haichuan, he held a bodyguard office in the imperial palace. Some stories say that he was a personal bodyguard to the dowager empress Cixi and escorted her from Beijing after the failure of the Boxer Movement.

While acting as a palace bodyguard, Yin Fu also taught martial arts. Yin Fu first taught his students lohanquan, or paochui, and only later taught them baguazhang. Yin Style Baguazhang is known for its strikes, kicks, and unique palm formation known as the ox’s tongue. The four fingers are close together, and the thumb pulls into the center of the hand, which is hollow. 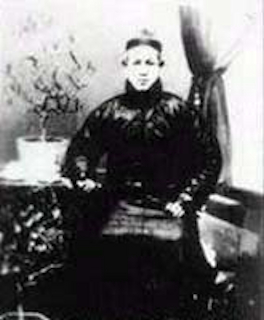 Cheng Tinghua (1848–1900) was the fourth disciple of Dong Haichuan. He owned an eyeglass shop in Beijing, so some called him Eyeglasses Cheng. During the Boxer Movement (July 1900) Cheng saw the invading armies killing and looting throughout Beijing. Upset at what was happening to his country, he swore to defend it. One day, Cheng Tinghua subdued ten of the looting soldiers before they ordered a patrol with rifles to surround him. Cheng used his baguazhang skills to evade the soldiers and leaped onto a wall where he started to walk away. The soldiers shot him dead.

Before he started studying with Dong Haichuan, Cheng Tinghua had an extensive background in Shuaijiao (Chinese Wrestling); therefore, Cheng Style Baguazhang is known for its throwing techniques. The hand is held in the Dragon Claw formation with the thumb spread wide, the tiger’s mouth curved up, the second, third, and fourth fingers are slightly spread apart, and the little finger and fourth finger held together. 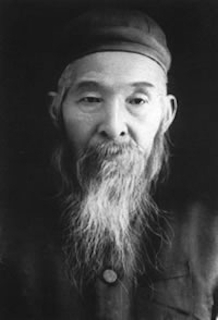 Sun Lutang (1861-1932) was a renowned master of Chinese martial arts and the creator of Sun Style Taijiquan. He was an accomplished Confucian and Daoist scholar, and contributed to the development of the internal martial arts through his published works.

Sun Lutang’s first book, A Study of Form Mind Boxing (1915), illustrated the complete training method for xingyiquan. In this book he made the argument that literary and martial art learning was the same, and that training in martial arts benefits the health of the practitioner.

His second book, A Study of Eight Trigrams Boxing (1916) was the first book on baguazhang. In this book, he connected the physical forms to the diagrams and philosophy of the Yi Jing.

His third book, A Study of Grand Ultimate Boxing (1921), detailed his own taijiquan form, and forever categorized the martial arts of baguazhang, xingyiquan, and taijiquan as internal martial arts.

It is difficult to determine if the division of Chinese martial arts between external and internal forms existed before Sun Lutang. In his book on taijiquan he traces the development of martial arts to “ancient times,” saying that martial arts were developed to prevent the body from “growing weaker by the day, and the hundred illnesses invading.” He further says that exercises created by Bodhidarma at the Shaolin temple were the basis for Yue Fei’s and Zhang Sanfeng’s martial and qigong systems.

He joined the taijiquan masters Yang Chengfu and Wu Chienchuan on the faculty of the Beijing Physical Education Research Institute, where they taught the internal martial arts to the public. He published two more books before his death in 1932.

Thank you for recognizing my creative efforts. I moderate all comments and will not tolerate nonsense. Cancel reply

The River Steps (a.k.a. Ladder Stepping) provide a method to study the transition of your weight between the insubstantial and substantial legs.
Study Now

Here is another traditional exercise to strengthen your torso, and one of the most hated words in the English language, Crunches.
Study Now

Be Bold
Be Creative
Be Yourself
Be Dapper Genius