The Making of Legends

Zhang Sanfeng (1247 – 1370) is a legendary figure of Daoism, and the mythical creator of taijiquan. Some stories about Zhang Sanfeng place him as early as the Five Dynasties and Ten Kingdoms period (907 – 960 CE) when China was undergoing a period of disunion. Others place him in the Song dynasty (960 – 1279 CE) which saw many achievements in science, philosophy, and arts, including the first use of printing (700 years before Europe), and the use of gunpowder in grenades.

If Zhang Sanfeng existed, he was probably born in 1247 and lived during the years of Marco Polo’s (1254 – 1324 CE) visit to China. He studied Buddhism and martial arts at the Shaolin temple before leaving and establishing the Daoist temples at Wudang Mountain.

At Wudang Mountain, Zhang Sanfeng created the taijiquan martial art. One story says that he saw a magpie and serpent fighting in the grass. He considered the softness and fierceness of both creatures and incorporated these ideas with his knowledge of the Huangdi Neijing, and Shaolin martial arts to create taijiquan.

Another legend says the Song emperor summoned Zhang Sanfeng, but rival soldiers blocked the road as he left to meet with the emperor. That night, Yuan (the first emperor of China) visited Zhang in a dream and taught him martial arts. In the morning, Zhang Sanfeng killed the soldiers and visited the Song emperor.

Other stories say Zhang Sanfeng was “The Sloppy Daoist” because he did not keep himself clean. These stories say Zhang was big and round like a turtle with a crane back and large ears and eyes, hardly the reposed figure represented at Wudang Mountain today. 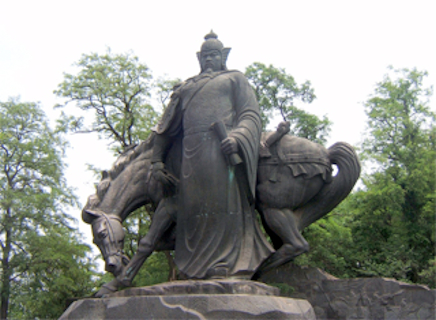 Yue Fei (1103 – 1142 CE) was a great military leader who is credited with the creation of many qigong and martial forms including xingyiquan, Eight Pieces of Brocade, and Eagle Claw Boxing. As a child he learned Shaolin martial art from a man who had studied at the Shaolin temple. He also studied the Art of War, and other Daoist texts. During this period, Jurchen invaders threatened to overthrow the Song dynasty. Since Yue Fei carefully chose, conditioned, and trained his army with the aforementioned forms he was successful on the battlefield. He was ready to launch a major assault on the Jurchen invaders when court officials conspired to have Yue Fei killed. The story of his betrayal became legend during the Ming dynasty when a book which refers to this story, Tale of the Eastern Window, became popular.

Fall of Empire and the Boxer Movement

In 1644 the Manchus marched into Beijing and formed China’s last dynasty, the Qing (1644 – 1912). The Manchus were an ethnic minority and forced the Han majority to shave the fronts of their heads and wear pigtails as a sign of submission.

Political intrigue plagued the Qing empire as China’s borders came under increasing pressure from western powers. A failure to modernize politically and economically ended the Chinese empire after two millennia. In a strange twist, that fall was linked to China’s rich martial art tradition.

After a series of natural disasters, and the people being upset by Anglo-French occupation, the Boxer Movement (1890 – 1900 CE) started in rural China. These spirit boxers claimed to have built up their qi with physical exercises and magic charms that gave them invulnerability to bullets. The boxers stormed churches and killed foreigners as the movement gathered strength and moved on to Beijing in 1900.

Cixi was the mother of the emperor and dowager empress of China, she took control of the country when the emperor died of smallpox. She sided with the Boxer Movement, declaring war on the occupying forces. When the boxers failed to oust the occupying forces (their physical exercises, magic charms, and qi were no match for bullets and cannons), she fled Beijing, fearing for her life. After the failure of the Boxer Movement, Russia, Germany, France, and Britain divided the country amongst themselves with treaties that did not fully dissolve until the end of the twentieth century.

Sun Yat-sen, a revolutionary leader, took control of China on January 1, 1912. For the next 40 years China would try to copy the government of the United States before the communist revolution in 1949.